The Office of Inspector General (OIG) continued to promote the integrity, economy, efficiency, and effectiveness of the programs and operations of the Board of Governors of the Federal Reserve System (Board) and the Consumer Financial Protection Bureau (CFPB). The following are highlights of our work during this semiannual reporting period. 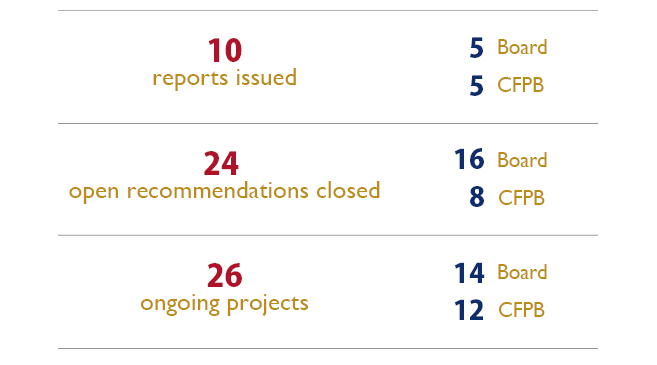 The CFPB's Acquisition and Contract Management of Select Cloud Computing Services. In January 2014, the Council of the Inspectors General on Integrity and Efficiency (CIGIE) spearheaded a governmentwide review of select agencies' efforts to adopt cloud computing technologies. In support of this initiative, we reviewed the CFPB's acquisition and contract management for two cloud service providers to determine whether requirements for security, service levels, and access to records were planned for, defined in contracts, and being monitored. Our report contains four recommendations to assist the CFPB's Chief Information Officer in strengthening processes for the acquisition and contract management of cloud services.

Enforcement Actions and Professional Liability Claims Against Institution-Affiliated Parties and Individuals Associated With Failed Institutions. Our office, the Federal Deposit Insurance Corporation (FDIC) OIG, and the U.S. Department of the Treasury (Treasury) OIG participated in an evaluation concerning actions that the FDIC, the Board, and the OCC took against individuals and entities in response to actions that harmed financial institutions. The report contains three recommendations intended to strengthen the Board's and the OCC's programs for pursuing enforcement actions, and four recommendations that apply exclusively to the FDIC.

The CFPB's Performance and Results Processes. We conducted an audit to assess the effectiveness of the CFPB's processes that address the Government Performance and Results Act of 1993, as amended by the GPRA Modernization Act of 2010 (GPRA). We also assessed the CFPB's compliance with applicable sections of GPRA. We found that the CFPB has developed effective strategic and performance planning processes; however, we made three recommendations designed to ensure full GPRA compliance and to assist the CFPB in building on its current success in establishing GPRA processes. 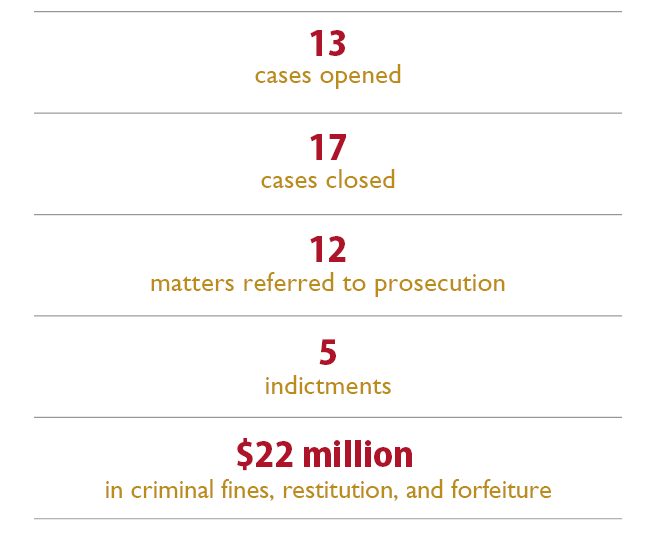 Guilty Plea for Former Bank Director of Montgomery Bank & Trust. On June 5, 2014, a former Bank Director pleaded guilty to bank, securities, and wire fraud to resolve charges brought in the Southern District of Georgia and the Eastern District of New York. The charges relate to a multimillion-dollar fraud scheme that the individual executed to defraud dozens of investors and a federally insured bank. Montgomery Bank & Trust (MB&T) is a subsidiary of Montgomery County Bankshares, Inc., a bank holding company regulated by the Board.