The Office of Inspector General (OIG) continued to promote the integrity, economy, efficiency, and effectiveness of the programs and operations of the Board of Governors of the Federal Reserve System (Board) and the Consumer Financial Protection Bureau (CFPB). The following are highlights of our work during this semiannual reporting period.

The CFPB's Diversity and Inclusion Efforts. We determined that the CFPB has taken steps to foster a diverse and inclusive workforce. We identified four areas of the CFPB's diversity and inclusion efforts that can be enhanced: training; data quality and monitoring trends; supervisors' and senior managers' accountability for diversity and inclusion; and succession planning. This audit was conducted in response to a congressional request.

The Board's Contingency Planning and Continuity of Operations Program. We found that the Board has developed a strategy and taken a number of actions to ensure the continuous operation of critical missions and essential functions in any emergency. Our audit identified areas in which the Board could improve its program to better ensure the timely recovery of mission-essential functions and systems.

The Board's Information Security Program. We found that the Board's Chief Information Officer is maintaining a Federal Information Security Management Act of 2002 (FISMA)–compliant approach to the Board's information security program that is generally consistent with requirements established by the National Institute of Standards and Technology and the Office of Management and Budget. We identified opportunities for improvement in the areas of plans of action and milestones, contractor systems, and continuous monitoring. 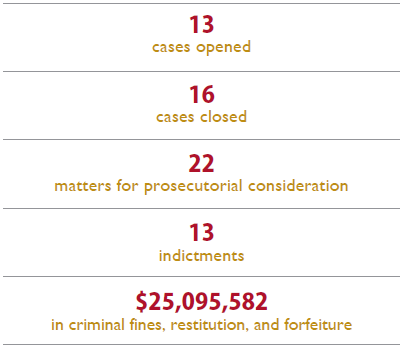 Guilty Pleas for Two United Commercial Bank Officials; Conviction for a Third. On October 7, 2014, a former Vice President of United Commercial Bank (UCB) pleaded guilty to charges of conspiracy to commit false bank entries, reports, and transactions related to his preparation of false and misleading reports. On December 9, 2014, a former Chief Financial Officer of UCB pleaded guilty to one count of conspiracy to make a materially false and misleading statement to an accountant. On March 25, 2015, a federal jury convicted the former UCB Chief Operating Officer and Chief Credit Officer of seven felony counts of conspiracy, securities fraud, and other corporate fraud offenses stemming from the bank's failure.

Six Individuals Charged in Alleged Home Loan Modification Services Scheme. On March 6, 2015, a 40-count federal indictment was unsealed in U.S. District Court in Salt Lake City, Utah, charging six individuals with conspiracy, mail fraud, wire fraud, telemarketing fraud, conspiracy to commit money laundering, and money laundering, in an alleged scheme to market and sell home loan modification services under the guise of a law firm. The CFPB regulates mortgage service providers, unless such services are provided by a law firm. We investigated this matter, in part, to determine whether any misrepresentations were made to the CFPB in an effort to obstruct the agency's enforcement program.