The Freedom of Information Act (FOIA) creates a right of public access to the records of federal agencies, including the Board of Governors of the Federal Reserve System (Board) and the Federal Open Market Committee (FOMC). Federal agencies must release records (or portions thereof) that are requested by the public unless these records are excluded from FOIA or fall under one of the nine FOIA exemptions. To enhance the public's access to Federal Reserve System (Federal Reserve) information, section 1103 of the Dodd-Frank Wall Street Reform and Consumer Protection Act of 2010 (Dodd-Frank Act) amended the Federal Reserve Act (FRA) by adding section 11(s). Under section 11(s), the Board is required to publicly disclose detailed transaction-level information concerning the Federal Reserve's emergency credit facilities, discount window lending programs, and open market operations. To allow these programs to function effectively, however, section 11(s) authorizes the Board to delay the disclosure of this information for designated time frames. Further, section 11(s) provides a FOIA exemption that exempts these records from release to the public until the mandated disclosure dates.

Section 1103 of the Dodd-Frank Act requires that the Office of Inspector General (OIG) of the Board study this FOIA exemption. Specifically, the OIG is to

We conducted this evaluation and prepared this report to fulfill these statutory requirements. Details on our scope and methodology are in appendix A, and the nine FOIA exemptions are listed in appendix B.

Consistent with its role as the nation's central bank, the Federal Reserve took action to respond to the financial crisis of 2007-2009 by providing liquidity to the private sector, supporting the functioning of credit markets, and reducing financial strains.1 Under section 13(3) of the FRA,2 the Board authorized the Federal Reserve Bank of New York (FRB-NY) and the Federal Reserve Bank of Boston to create emergency credit facilities with broad-based eligibility and for specific institutions. This exercise of authority under unusual and exigent circumstances, coupled with modifications to the Board's more traditional tools (e.g., discount window lending program and open market operations), was followed by calls for increased transparency surrounding the Board's actions. In addition, there were requests from the public under FOIA for information related to these actions, such as borrowers' names, loan amounts, and pledged collateral. The Federal Reserve provided information about the interest rates and other terms of these programs, the amounts lent, and the eligibility criteria for participants, as well as regular status reports. However, the Board withheld transaction-level information using existing FOIA exemptions due to concerns that the release of this information would harm the effectiveness of these tools.3

On July 21, 2010, Congress enacted the Dodd-Frank Act, in part, to address a variety of issues raised by the financial crisis and to promote increased transparency. Among other things, the Dodd-Frank Act amended the FRA by adding section 11(s). The Board's disclosure requirements under section 11(s) of the FRA, and the related FOIA exemption, apply to three types of Federal Reserve activities: emergency credit facilities, discount window lending programs, and open market operations. The following describes each of these activities and how each is used by the Federal Reserve.

Pursuant to section 13(3) of the FRA, the Board authorized the following six emergency credit facilities with broad-based eligibility to stabilize the financial system and support economic activity:

a Firms that are authorized to buy and sell U.S. government securities with FRB-NY's Open Market Desk, which operates on behalf of the FOMC, in order to implement monetary policy.
b Only the TALF has outstanding loans. As of October 31, 2012, these loans totaled approximately $1.2 billion, and they are scheduled to mature no later than March 2015, according to the TALF terms and conditions. The other facilities' loans were repaid in full with interest.

In addition to its broad-based emergency lending, the Board authorized assistance to avert the disorderly failures of institutions, such as the Bear Stearns Companies, Inc., and American International Group, Inc. (AIG).4 Board officials believed that disorderly failures could have further strained the financial system as a whole and harmed the U.S. economy.

In addition to creating emergency credit facilities, the Federal Reserve modified the terms of discount window lending, one of its traditional monetary policy tools. Discount window lending (1) helps achieve the target federal funds rate,5 (2) serves as a safety valve by relieving pressure in markets for federal funds, and (3) helps promote basic stability of the payment system. Each Federal Reserve Bank (Reserve Bank) uses its discount window to extend primary credit on a short-term basis to eligible depository institutions in its district at rates above the FOMC's target federal funds rate.

Depository institutions eligible for primary credit at the discount window include certain commercial banks, thrift institutions, and U.S. branches and agencies of foreign banks in generally sound financial condition. The Reserve Banks generally determine eligibility for credit according to criteria based mainly on the borrower's examination ratings and capital levels. Loans from the discount window must be secured by collateral acceptable to the lending Reserve Bank, and most performing or investment-grade assets held by depository institutions are acceptable. Given the above-market pricing for credit, the Federal Reserve expects that institutions will use the discount window as a backup source of funding. The central banks of most industrialized countries have similar lending facilities that extend collateralized credit at an above-market rate.

During the financial crisis, the Federal Reserve made several modifications to its discount window lending programs to help relieve liquidity strains in depository institutions and in the banking system as a whole, including lowering the primary credit rate and extending the maximum term on primary credit loans. In addition, in December 2007 the Federal Reserve created the Term Auction Facility (TAF) to improve depository institutions' access to term funding (i.e., funding that is longer than overnight). The TAF provided credit through an auction mechanism to depository institutions in generally sound financial condition.

The Federal Reserve considers open market operations to be its primary monetary policy tool. The principal goal of open market operations is to affect the federal funds rate, which impacts other rates throughout the economy, by influencing the amount of reserve balances in the banking system. The Federal Reserve has traditionally sold or purchased securities, primarily U.S. Treasury securities and federal agency securities, either in outright purchases or sales or through repurchase agreements,6 in the open market using primary dealers. By adjusting the level of reserve balances,7 the Federal Reserve influences the federal funds rate as shown by the following diagram. 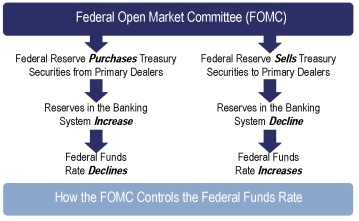 In addition, to address heightened pressures in term funding markets during the financial crisis, the Federal Reserve conducted a series of what were called single-tranche term repurchase agreements from March 2008 to December 2008. These repurchase agreements provided funding to primary dealers for up to 28 days to help address liquidity pressures across a number of financing markets and supported the flow of credit to U.S. households and business. Furthermore, since late 2008 the FOMC has used large-scale asset purchases of Treasury, agency, and agency-backed securities to put downward pressure on longer-term interest rates and ease financial conditions more broadly.

Disclosure Requirements of the FRA

Congress enacted the Dodd-Frank Act, in part, to address a variety of issues raised by the financial crisis and to promote increased transparency. The Dodd-Frank Act amended the FRA by adding section 11(s) to enhance the public's access to Federal Reserve-related information in several ways. For example, it requires the Board to publicly disclose specified information concerning the borrowers and counterparties participating in emergency credit facilities, discount window lending programs, and open market operations that are authorized or conducted by the Board or a Reserve Bank. The specific information required for disclosure under section 11(s) of the FRA includes

The Dodd-Frank Act amendments to the FRA require the release of this borrower and counterparty (transaction-level) information but permit a delay of this release to allow these emergency credit facilities, discount window lending programs, and open market operations to function effectively. For emergency credit facilities, public disclosure is required one year after the effective date of the termination by the Board of the authorization of the credit facility. For discount window lending programs and open market operations transactions, the Board is required to disclose the information on the last day of the eighth calendar quarter following the calendar quarter in which these transactions were conducted.

The Dodd-Frank Act amendments to the FRA include a FOIA exemption to allow for this transaction-level information to be kept confidential until the relevant mandatory release dates. Section 11(s) of the FRA provides the Chairman of the Board with the authority to publicly release this information earlier "if the Chairman determines that such disclosure would be in the public interest and would not harm the effectiveness of the relevant credit facility or the purpose or conduct of covered transactions."